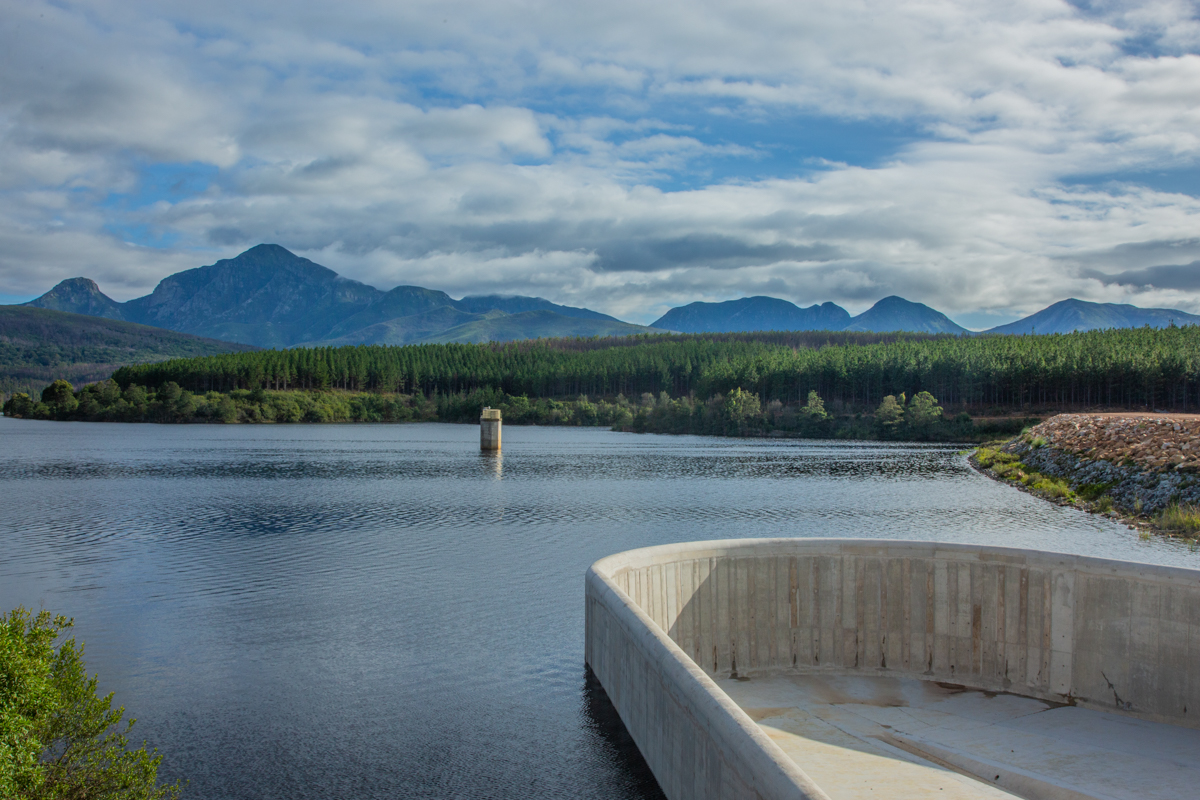 Excitement is growing as the Garden Route Dam is filling up towards its new capacity following the raising of the dam wall and completion of its new spillway last December (2019).

George Municipality Director Civil Engineering Regenald Wesso said the dam level had not risen above its previous capacity since the spillway project was completed, but recent abundant rainfall had filled the dam up relatively quickly and reached its ‘old’ 100 percent capacity today (7 October 2020). “Everything from here upwards is new territory and we are excited to see the real capacity of the dam – the expected additional capacity is 20% but will be confirmed with a new calibration in due course.”

The process of appointing a service provider to do the calibration is underway. In the meantime, locals are keeping a close eye on the rising dam level as more rain is expected this week and for the summer. The dam level has risen by more than 20% (from 78,76% to 100%) since the first week in September and 141,8mm rainfall has been recorded from 2 September until today.

It is unknown how quickly the additional dam capacity will fill up, especially taking into consideration that the ‘new’ top edge of the dam is wider and the incline flatter than before. “We are nonetheless grateful for a good rainy season and the additional capacity our dam will hold to support sustainable water management of our fast-growing city,” said Mr Wesso.

George Municipal Manager Trevor Botha said although the current water situation was a great relief, the municipality remained mindful of the bigger picture and would continue to promote long-term water security.

“The city will continue to promote water saving and will not forget that our dam level had dropped to 41.21% during the height of the previous drought in September 2017. Water restrictions are expected to remain at its current Level 2B for the foreseeable future – restrictions promote a mindset change that is globally supported: drinkable water from a tap is a privilege that should be respected and is not guaranteed. Population growth, climate change and economic challenges are just some of the factors that will affect potable household water supply in all nations in the foreseeable future.

“While the George municipality understands that citizens feel it is their right to use the water they have helped save, national and global water issues are bigger than us. We have been blessed by rains and our dam is reaching new heights, but we must do the right thing and that is cultivating a permanent lifestyle of water conservation,” said Mr Botha.

Caption
The Garden Route Dam, photographed in January 2020 when the dam level was at 100% of the ‘old’ capacity. The duckbill-shaped spillway (foreground) and raised dam wall (right) were completed the month before. When the water spills over the cement spillway in the foreground, the dam will be considered 100% full at its ‘new’ capacity.