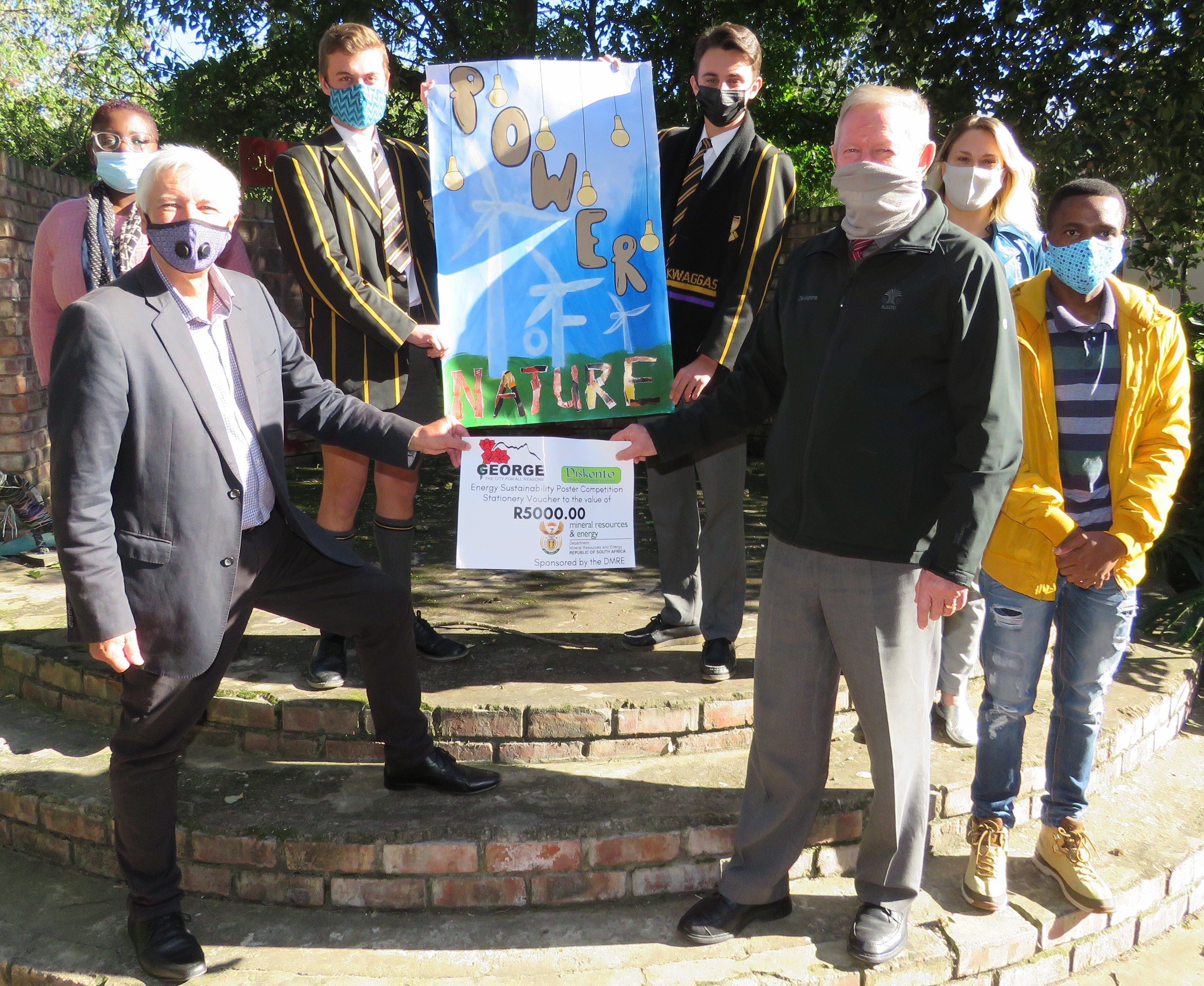 The George Municipality’s Poster Competition on Energy Sustainability came to an end on Monday 7th June, when the two winning schools in the high school and primary school categories, Outeniqua High School and Outeniqua Primary School were announced and the Mayor of George presented them with their prizes.

Mayor van Wyk was in awe of the standard of work of both the primary and high school learners. He told the learners that he is not only impressed by their artwork but by their thinking. “We are all experiencing the inconvenience of loadshedding. We need to move into other forms of energy by wind, sun and other methods. This is the future of our world and our world is changing rapidly. It is awesome that you are part of that change,” he said.
Van Wyk said to the learners that you are the generation that will use renewable energy and it is great that you had this opportunity to showcase your thoughts. He congratulated the winners and thanked all of the schools that participated and made the competition a success.

Thabo Yiga from the Electrotechnical Directorate who drove the project with the other interns at the Directorate, thanked all the ten schools for participating in the George Municipality’s Energy Sustainability Competition. “The posters clearly show that the learners took the competition seriously and worked hard to produce quality work,” Yiga said.

Learners were meant to reflect their understanding of Energy Sustainability in the poster. The posters were judged by effort, art and creativity and message.
Some of the teachers and learners shared their experiences during the competition.
Leoni Selzer, Art teacher at Outeniqua Primary School said the process taught them how very important it is to save the world we live in and it was an incredibly great opportunity for the learners to research their own work and work on their art pieces.

An-Sophie Buchholz (12), a grade 7 pupil, said her painting depicted the earth warming up to the extent that it has a detrimental effect on the survival of wildlife like the polar bear.
Mari Coetzee, Art teacher at Outeniqua High School, said it was important to them to participate in the competition to get our younger generation thinking about preserving nature and thinking of alternative solutions to our energy needs.

Marlo Barnard (16), a grade 11 learner, said it was great coming together as a team, while his teammate, Wessel Janse van Rensburg (17), grade 11, said they are grateful for the opportunity and had loads of fun. They have used recycled paper from old exam books and magazines for the task.

Sustainable energy is power which is able to be replenished within a human lifetime and so cause no long-term damage to the environment. Sustainable energy includes all renewable energy sources, such as hydroelectricity, biomass, geothermal, wind, wave, tidal and solar energies.

Outeniqua High School: Outeniqua High School is the winner out of the three competing high schools in the George Municipality’s Energy Sustainability Poster Competition. Here Mayor Van Wyk hands over the winning cheque to principal Christo Vorster (with black jacket). At the back from left are Mphielo Ramotsai, Electrotechnical Directorate, two of the winning learners with the winning poster, Wessel Janse van Rensburg, Marlo Barnard, Art teacher Mari Coetzee and Thabo Yiga, Electrotechnical Directorate. The poster that was made mostly of recycled material says: Power “of” Nature. The “of” word is cleverly formed and hidden into one of the windmills. All the prize-winners are mentioned in the full page advert in the George Herald 10 June 2021.

Outeniqua Primary: Outeniqua Primary School is the winner in the category Primary Schools, in the George Municipality’s Energy Sustainability Poster Competition. They have beaten six other schools to the first prize. In the middle of the picture is the Executive Mayor of George, Ald Leon van Wyk (with the dark suit) handing the winning cheque of R5000 to Dr Nico Venter, School Principal. To the Mayor’s left are Mphielo Ramotsai and Thabo Yiga, Electrotechnical Directorate who drove the project. To Dr Venter’s right is the Art teacher that assisted the learners in the project, Leoni Selzer. Around them are all the learners who are part of the group that won the competition.