Quoting from Malcolm Gladwell’s popular book “Outliers” which discusses the 10,000-hours concept, Ald Van Wyk acknowledged the time, energy, sheer will and determination that got Elroy and Bianca to the Olympics this year. “Outliers”, according to Gladwell are the best and the brightest, the most famous and the most successful. He asks the question: what makes high-achievers different? And determines that 10 000 hours of practice plays a substantial role in the incredible achievements of elite artists, athletes and musicians.”

Yvonne and Stephen Gelant proud parents of Elroy Gelant, who is lecturing at Potchefstroom University, received a framed photograph of the George Mountains for their son, who competed for South Africa at the 2021 Tokyo Olympics earlier this year. Bianca Buitendag, professional surfer was the Silver Medal winner for Women’s shortboard competition at the 2021 Tokyo Olympics was thrilled with her framed photograph of a surfer standing on the rocks at Victoria Bay photographed by local Melanie Marè.

George Municipality is proud to announce that we will financially support and host the annual Elroy Gelant Night Race this year, to be held in Pacaltsdorp in December, a sporting and fun event for the whole family. The annual event is aimed at developing local athletics and promoting sports. The race falls within the approved SWD athletics calendar. In 2016 the race was named after local athlete Elroy Gelant, from Pacaltsdorp, in honour of him becoming an Olympic athlete in that year.

George Municipality partnered with Bianca Buitendag supporting her financially in her quest to win a medal at the Tokyo Olympic Games. Bianca was appointed as an ambassador for George and proved to be a key asset in promoting George as a tourist and great surfing destination. A spinoff of this support is a girl’s social surf which will be hosted by Bianca Buitendag at Victoria Bay in October, where she hopes to inspire young surfers to reach for their dreams. Watch the press for details.
>
Photographs: Please note all Covid-19 protocols were observed at the gathering. Masks were removed for photographs only.
Bianca Buitendag with SA flag taken on day of her Silver Medal win in Tokyo.
> 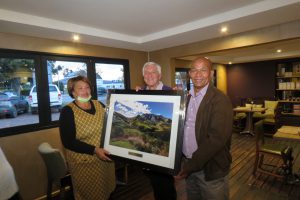