A total of 388 beneficiaries received housing already in the new development. In Phase C a total of 279 beneficiaries must still receive housing. The development have 3 phases starting with phase C and ending with phase A.
Construction of the Mixed-Use development began in 2018 and after completion will yield a total of 1650 Breaking New Ground (BNG) units, comprising of double storey, semi-detached and freestanding units. It will also include 258 Financed Linked Individual Subsidy Programme (FLISP) units and 186 Affordable housing units. The project will also provide one general residential erf, 7 creches, 3 churches, 1 community and 7 commercial/ business erven.
Mayor Van Wyk told residents that they just became R150 000 richer because of the homes they have now.

“As beneficiaries, you now have something to pass on to the next generation. As a municipality, we are proud that we could be a part of this special day in your lives and we want you to enjoy your new homes,” the Mayor said.

Cllr Raybin Figland, Portfolio Councillor of Human Settlements, encouraged the beneficiaries to take pride in their homes and neighbourhood. He encouraged them to get to know their neighbours and not allow negative elements to take over their community and home. He asked them not to sell their homes as there are other people still waiting and desperate for the opportunity they have.

Figland urged beneficiaries to lodge any complaints to the area office in their vicinity.
Deputy Mayor Charlotte Clarke also told residents that they now have a place that they can call their own. She implored them to look after these homes and respect each other. 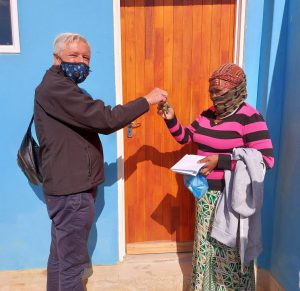