The electrification of 10 homes in Blondi Informal Settlement is the second of the three Short Term Urgent Electrification projects that were prioritized by Council (March 2021) in terms of the R800 000 available budget for the 2020/21 Financial year. The cost per structure for electrification is between R10 000 – R13 000 which includes a prepaid meter.

Executive Mayor Leon Van Wyk visited the site yesterday (8 September) to switch on the power. Each resident received their own electrical prepaid meter, in their own name with power supply of 40 amps. Executive Mayor Leon Van Wyk was pleased that the municipality has linked these residents to the available resources, in this case to provide electricity.
Ward councillor, Sivuyile Dikilili was overjoyed at the event on behalf of the recipients and thankful that the municipality was able to assist. Resident Ncumisa Ntsendwana was thrilled and said “ This means so much to me, now my children can write at night, at first they couldn’t do this because we used candles. Thank you so much Mayor.”

Nandipha Botman and her brother Xolani Mguzula were incredibly happy at the difference this would make in their day to day lives. “This will make our lives a little easier. The children will be coming in the holidays. They can now do their schoolwork and we will now be able to cook. It just makes everything so much safer, “ said Mguzulu. 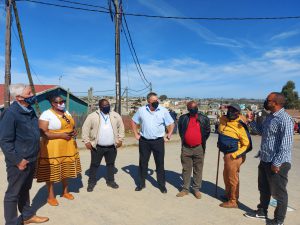 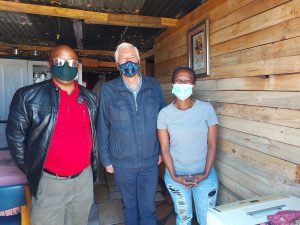 110011: Nandipha Botman and her brother Xolani Mguzula (brother and sister) who also had their home electrified were all smiles as Nandipha flipped the switch and put on the electricity in their home. Here they are with Portfolio Councillor for Electrotechnical Services Nosicelo Mbete, Ward Cllr Sivuyile Dikilili and Ald Van Wyk. Video link https://www.dropbox.com/s/3v9c1wkqgg8c5n5/20210909_105918.mp4?dl=0 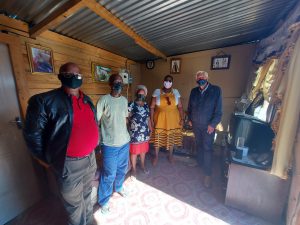