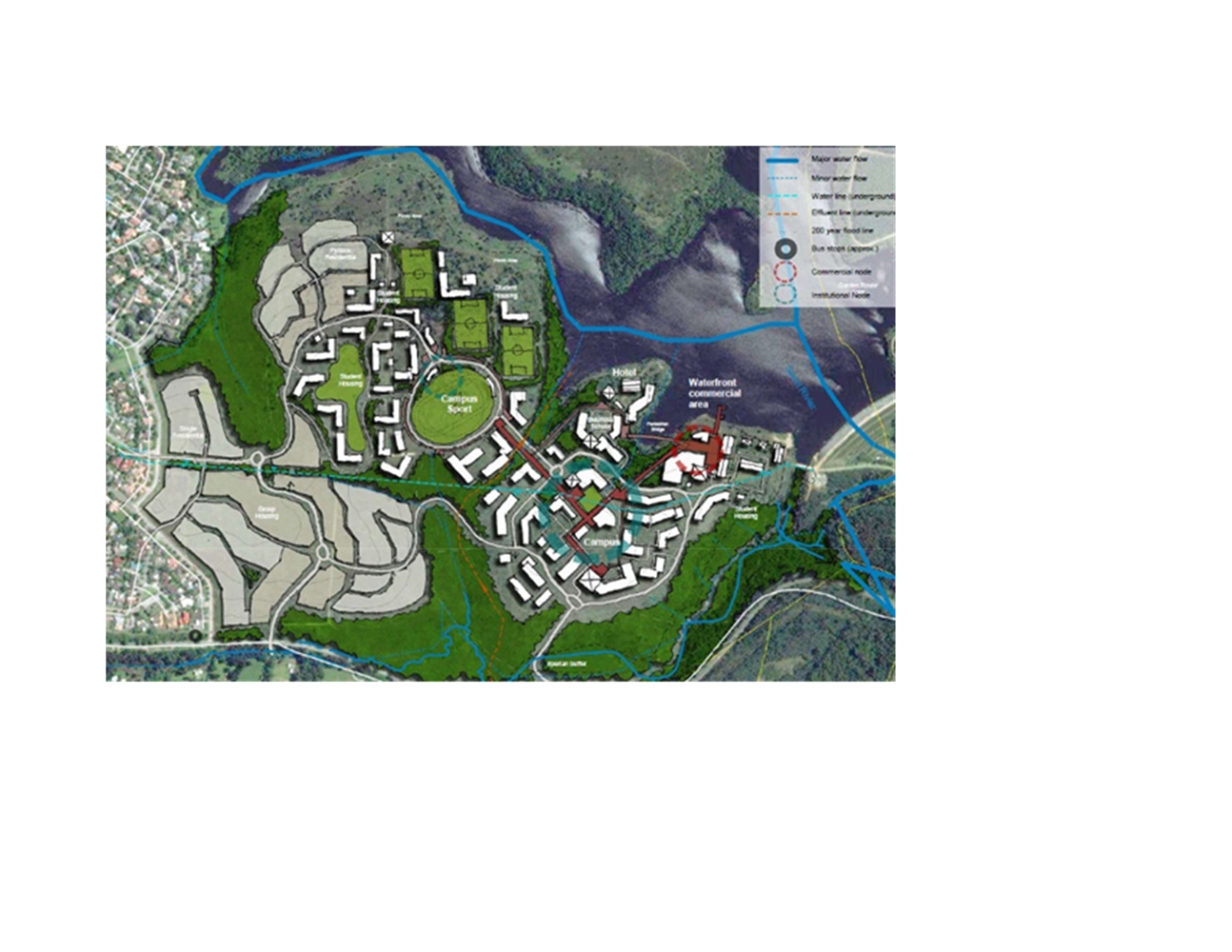 George Municipality is aware of concerns raised on social media and in petitions pertaining to the proposed development at the GRD, namely the DRAFT ENVIRONMENTAL IMPACT ASSESSMENT REPORT FOR THE PROPOSED TERTIARY AND MIXED-USE PRECINCT DEVELOPMENT AT THE GARDEN ROUTE DAM AND ASSOCIATED INFRASTRUCTURE ON A PORTION OF THE REMAINDER OF ERF 464, GEORGE (reference DEA&DP Ref: 16/3/3/2/D2/19/0000/22). These concerns have also been recorded as part of the extensive public participation process.

INITIAL APPLICATIONS FOR AUTHORISATIONS COMMENCED IN 2006

The current EIA is the second round of processes to attain land rights for Erf 464, situated at the Garden Route Dam. In the mid-2000s the Council sought to attain zoning rights for residential and business. After several years, in 2014, DEADP granted partial environmental authorization in support of a hotel business, tourism elements allowing for the appropriate management of the conservation areas; and open space and access from Stander Str. Conditions were imposed regarding environmental management; the use of specialists needed during construction; and the use of gravity sewer systems were proposed to reduce risk of contamination of the water course.

However, the residential components were not authorised and DEADP indicated that they would not support an extensive residential development. The reasons for not supporting the full proposal included uncertainty about the imposition of long-term management provisions; the integration of social, economic, and environmental factors was not adequately demonstrated in the application; there was concern over visual impacts; the demand for residential erven was questioned; and the proposal did not redress segregated communities.

Based on the EIA outcome, Council elected not to take the matter any further, except for requesting (and receiving) approval for the extension of the approvals granted in 2014. In 2019 the rights were extended to 2024 by DEADP.

In and around 2018 Council received several queries from the private sector requesting access to land to establish a tertiary education or research institution. After careful consideration Council took a decision instructing the administration to investigate the use of Erf 464, adjacent to the Garden Route Dam as a site for such a development. Council also resolved that there be a process to attain the environmental approvals and the town planning or land rights. Finally, Council resolved that once the latter processes were completed, the matter must revert to Council for further consideration.

At no time did Council indicate any intent to undertake such a development itself. The unfortunate and misinformed contentions that Council is acting in the interests of any business or individual is rejected with the contempt it deserves. Council land is a valuable asset and, as any landowner will know, ensuring that property is correctly and appropriately zoned maximises the value of the property.

The Municipality went ahead and appointed consultants to undertake these two processes.  This process has taken the better part of three years and the two applications will soon have to be adjudicated by the relevant authorities, namely the Western Cape Department of Environmental Affairs and Development Planning (to assess the EIA) and the Eden Municipal Planning Tribunal (to assess the town planning application).

The Environmental Impact Assessment application has now been completed and is accompanied by specialist reports including case studies, an urban design report, heritage impact and recommendations, a visual impact assessment, engineering report, stormwater management plan and traffic impact assessment. There were also extensive discussions with Cape Nature and SANParks whose input was that a butterfly study was required.

Besides making the document available to all who have registered as Interested and Affected Parties, notices inviting comment were placed by Sharples Environmental Services (SES) as required by DEADP. Anyone may comment on the report. Any additional comment on the DEIAR document and proposed activity must be submitted in writing to SES: Betsy Ditcham on or before 11 March 2022 by means of the following: Fax: 086-575 2869, email: betsy@sescc.net or postal address: PO Box 443, Milnerton, 7435.

There are two interrelated, legislated processes relating to the proposed development, both inviting public participation/input and support. These are the current Environmental Impact Assessment (SES EIA process), to be assessed by DEADP and the town-planning application, which will be independently evaluated by the Eden Municipal Planning Tribunal.

DEADP has about 5-months for comment and to make a final decision. Thereafter the town-planning application will be considered by the Tribunal. Neither the George Council nor any official will undertake any authorisation at all.

It must be noted that BOTH authorisations have to be in place for any development to go ahead. If either one of the applications are refused, then the other cannot succeed. The town planning application will only be submitted to the Tribunal for consideration once DEADP has issued their decision.

Once the decisions have been made, both processes allow for a 21-day appeals period.

Irrespective of the ultimate outcomes of both processes, the matter must revert to Council. This is in terms of the 2018 Council decision. If the outcomes are in favour of any form of development Council will have to decide if it wishes to further proceed to act upon the rights – whether in full or only elements of the approved development. For example, Council may decide to only proceed with the residential development, and Council may impose certain restrictions on any development opportunity. Council will also need to resolve as to whether the matter must go to tender or call for proposals. The latter will depend on what Council ultimately elects to do with the land in question.

Unfortunately, the public comments and petitions made on social media and other platforms about this application are not necessarily accurate nor representative of the type of development envisioned. Please guard against misinformation.

Aspects of the projects which may impact on the environment have been studied by qualified professionals and the required adjustments were made to the initial project proposal (footprint). Points raised in the Public Participation process thus far and responses thereto are noted in the Appendix E of the Draft Environmental Impact Assessment Report.  All concerned residents are invited to read the relevant studies, view the adjusted development proposal, and review the responses compiled in project documentation. A hard copy of the report DEIAR has been made available in the George Public Library.

Should this project come to fruition, specifications include more than 75ha of the 118ha (64%) to be open space conservation area. Of the remaining 36%, only 5ha (4%) will be commercial, and the rest (32%) will be educational and residential. The intention is that all future users become custodians of the space and the site be managed by firm rules in terms of an Environmental Management Plan.

It is important to note that although the land is owned by Council and the Municipality contracted the required applications, Council will not have any role in the authorisations or approvals at all. Furthermore, as stated previously, Council has no intention to develop the property itself. It is noted that assumptions have been placed in the public domain which contend that the development has been earmarked for a potential developer (s). This is refuted in its entirety.

LAYOUT OF THE SITE

Aurecon (now Zutari) was appointed by George Municipality to design the precinct for the proposed university and to prepare a rezoning and subdivision application. The Zutari team included professional town planners, urban designers, and civil engineers and the team worked closely with the Municipal officials in the planning department as well as the civil and technical departments.  The Zutari team also collaborated closely with the environmental consultants appointed by the municipality to apply for the environmental authorisation (Sharples Environmental Services), as well as other professional service providers such as traffic engineers, electrical engineers, geotechnical engineers, socio economic specialists etc. when the layout plan was designed.

The planning of the layout plan went through an iterative process before it was finalised and submitted as part of the rezoning and subdivision application. After a visioning workshop and a study to indicate sensitivity areas, concept development workshops were held where several stakeholders took part in developing three development concepts.

The three development concepts were then workshopped to work through the pros and cons of each concept and to select a preferred concept.

A draft site plan with the buildings displayed below is the campus proposal that was prepared by the urban designer and is the preferred concept that was developed through inputs from the various specialists and the outcomes of the concept development workshops.

This urban design concept is a way to illustrate to IAPs what the final product could potentially look like (illustrative purposes) and provides an indication of the scale and height of the proposed buildings in the development. The preferred development concept as above (Urban Design Site Plan – Campus Proposal) was used as the basis for the preparation of the subdivision layout drawing that is required as part of the town planning application and was submitted with the rezoning and subdivision application.

Through the process, the layout was amended and refined as more information became available (civil engineering, traffic impact study, visual impact study, environmental studies, etc.). All areas that were deemed not to be suitable for development (steep slopes, flood lines, environmental sensitive areas, etc.) were excluded from the areas planned for development and extensive buffers were added to further protect environmental sensitive areas before a final layout plan was developed that was submitted with the rezoning and subdivision application.

The final layout drawing that was submitted with the rezoning and subdivision application is below.  This drawing for the town planning application shows the erven that are planned with the respective zonings that will create erven with the appropriate zonings that will enable a campus to be developed as per the development concept prepared by the urban designer.  A subdivision layout such as this is a requirement for the town planning process, as it needs to show the technical details of the proposed erven and applicable zonings etc.

Once the layout plan is approved, Architects will design buildings according to the development restrictions imposed by the town planning process such as height, coverage, FAR, density, building lines etc.  Building plans will need to be submitted for approval for each building that is planned in the development before construction can start. The final placement of buildings on the individual erven or the final design of buildings are not yet available as this is something that comes only much later in the process.

With regards to roads and access: there are new roads that are proposed in the layout plan of the proposed development (see layout plan above).  Those are all public roads that will be accessible by the public. There are also plenty of open spaces incorporated in the layout where hiking and mountain biking routes will continue to exist.  Access to the dam wall and all the other trails on the other side of the dam wall will continue to be open to the public and will be made easier and safer by the proposed development.

Large picnic areas are planned next to the water’s edge in the northern part of the layout, so the current fishing and recreational activities that take place next to the dam will continue once the proposed development is constructed.

The idea of the proposed waterfront business site (which was first proposed in 2006) is to provide some small convenient shopping, some restaurants / coffee shops and parking facilities where sports enthusiast can gather before and after their sporting excursions in the nature areas.

In closing, George Municipality agrees that the dam must remain accessible to all citizens and believes that responsible, sustainable, mixed land use development will not only celebrate the qualities of this extraordinary site but also address some of the negative issues which residents are experiencing associated with large tracts of densely vegetated land – such as illegal occupation of land, sheltering of vagrants and criminals, cost of vegetation management and fire risk. Council has to seek ways in which to protect its assets and sweat its assets in order to provide for the development and the protection of the city and its environment.