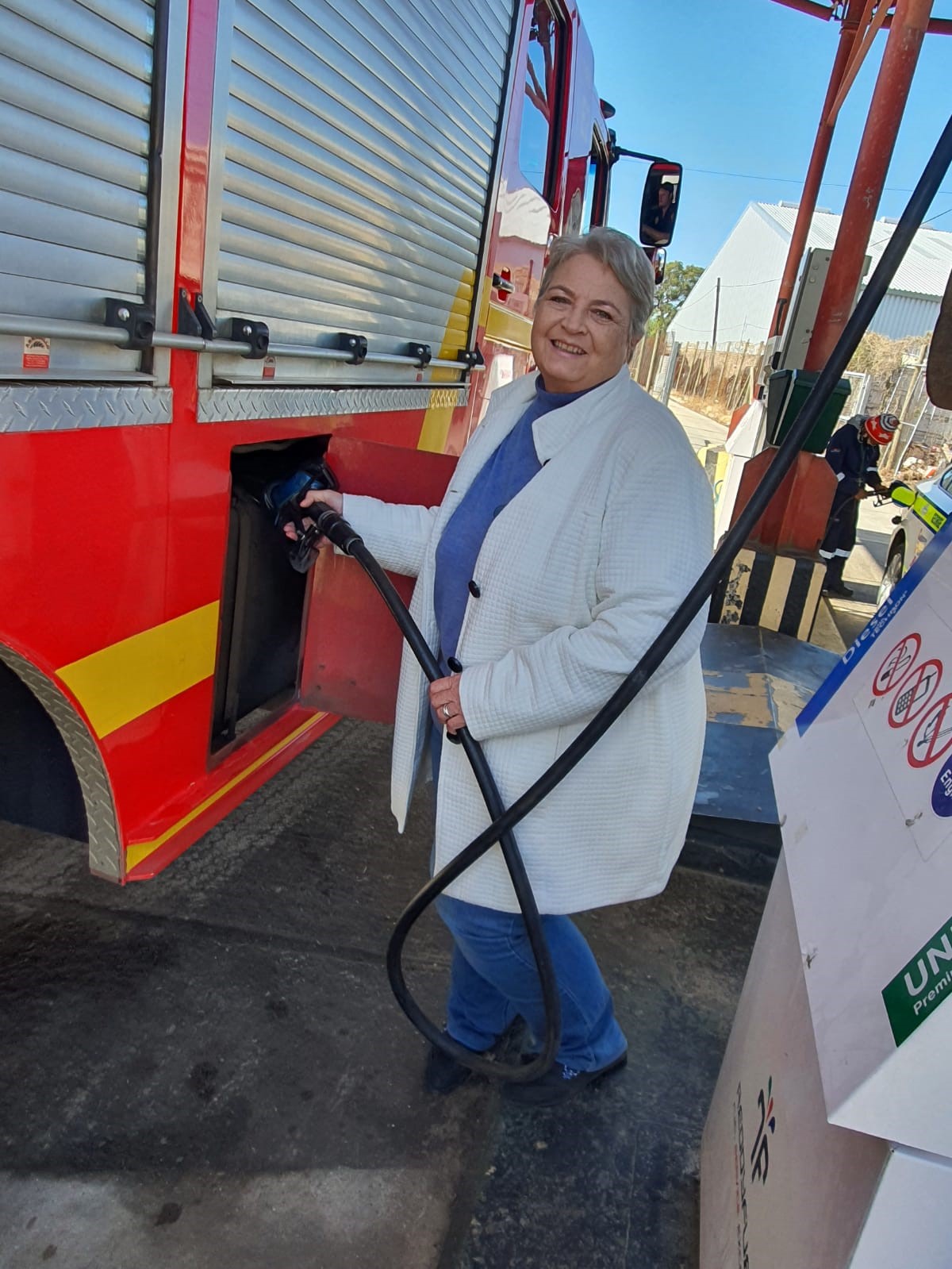 George Municipality Fleet Manager Manon McDonald, aged 56, this month retires from a lifetime career in a ‘man’s world’. Manon is an electrical engineering technician who in later years took on municipal fleet management as part of her job in Knysna. As fleet manager in George since 2015 she has been responsible for more than 1000 vehicles and associated equipment.

Manon became an electrical engineering student because she wasn’t good at typing. “I didn’t know what to do after school and was looking at courses at the local Klerksdorp Technikon to see if there was anything I could see myself doing for a living. I had a head for administration, so a secretarial course seemed a logical choice, but I was really bad at typing, which was still a major part of office management in the 1980s,” says Manon.

The only other thing that appealed was a qualification as electrical engineering technician, mostly because she liked maths and science that were core subjects in the course. “I was the only woman in a man’s world for most of my career which was unusual for everyone, not just the men, but people got used to me being there and it became less of a thing. Sometimes the men would take the mickey out of me, but it made me stronger, more committed and more determined.”

A decision that would stand her in good stead was pushing through to obtain the advanced NQ6 electrical engineering diploma. “To this day most people will qualify with the NQ4 technician qualification and there are very few women in South Africa with NQ6. The extra two years were much tougher, especially the maths, but it facilitated key career opportunities that became very important when life threw me a few curve balls.”

Good marks and references convinced the electrical engineer at Klerksdorp Municipality to take a chance on Manon, the first female electrical technical assistant to be appointed at the local authority in 1990. Despite irregular hours, extreme weather conditions and the inherent danger of electricity Manon thrived. “I loved that the work was different every day, that much of it was outdoors and very interesting.”

Eight years later when she needed a change, a glowing reference secured Manon the principal technician post at Knysna Municipality. “I arrived in this small town, recently widowed with an 18-month-old baby and no support system at home. It is a great testament to the men in that department at the time who not only accepted a female boss but one who sometimes brought a sleeping baby to after-hours callouts. Everyone would keep an ear out for my son, Rüttger, in case he would wake up and start crying, but he was very good and seldom even stirred while we did our jobs nearby.

“Although I did not strictly have to go out on all the calls at night, it was important for me to do so at least in the beginning while I was getting to know the people and the area. I wanted them to see that I was committed and willing to do what it takes, that I wouldn’t use my child as an excuse to not do my job.”

Knysna’s vehicle fleet was the responsibility of the electrotechnical department, and its management formed part of Manon’s job. “My dad was a motor vehicle mechanic, and I spent most days after school in his workshop, so this felt like familiar territory.”

Her job included buying new vehicles, overseeing the mechanical workshop and petrol and diesel filling station, vehicle licencing, insurance and a whole lot of related administration. Fleet management meant less afterhours work than electrical, which motivated Manon to apply for a position as fleet manager at George Municipality, which she got in 2015.

“Vehicles are expensive but essential for service delivery, which makes budgeting challenging in a growing municipality with limited resources. It is frustrating for everyone when an old truck that should really be replaced is in the workshop more than on the road, but it is our reality and we make the best of the circumstances.”

In the six years she has worked here, Manon has facilitated the purchasing of 176 vehicles and trucks, many of which have specialist requirements. Among these is the municipality’s first truck tractor which pulls a 35 000-litre stainless steel water tank as a movable water source during firefighting and South Africa’s first extra-high panel van in red for the Fire Department’s new mobile control centre.

Manon also had the fuel pumps upgraded so both pumps could issue dual product (petrol and diesel), managed renovations in the office to maximise space and facilitated the purchasing of a 31 000-litre above-ground storage tank that will be completed next month.

“Running a municipality’s fleet is not just about the vehicles in the current fleet, but about overall sustainability. For instance, the department may weigh up the pros and cons of buying a recovery vehicle for heavy vehicles versus the costs of a service provider, or whether the benefits of an inhouse workshop outweigh implications such as additional staff, space and equipment costs. A fleet is also about thousands of people who drive and travel in those vehicles every day – their safety and capacity to do their work as efficiently as possible are all inherent to this job.”

No matter the job description, Manon almost always had men reporting to her and some handled this better than others. “Some were quite blatantly disrespectful and adamant that they would not come to me for anything. I made a concerted effort to not take offense or get angry, or to be snide or vengeful when they eventually had no choice but to come to me for help or support. It was important to me to not rub my power and authority in their face and hoped they would eventually realise that I could be an ally.

“I always considered myself a lady and never swore at somebody or about any situation. I instinctively knew that I couldn’t be one of the boys and didn’t think it was necessary for me to try. I am my own person, not defined by my work or my gender.”

Manon and her husband Johan intend moving to Agulhas later this year.