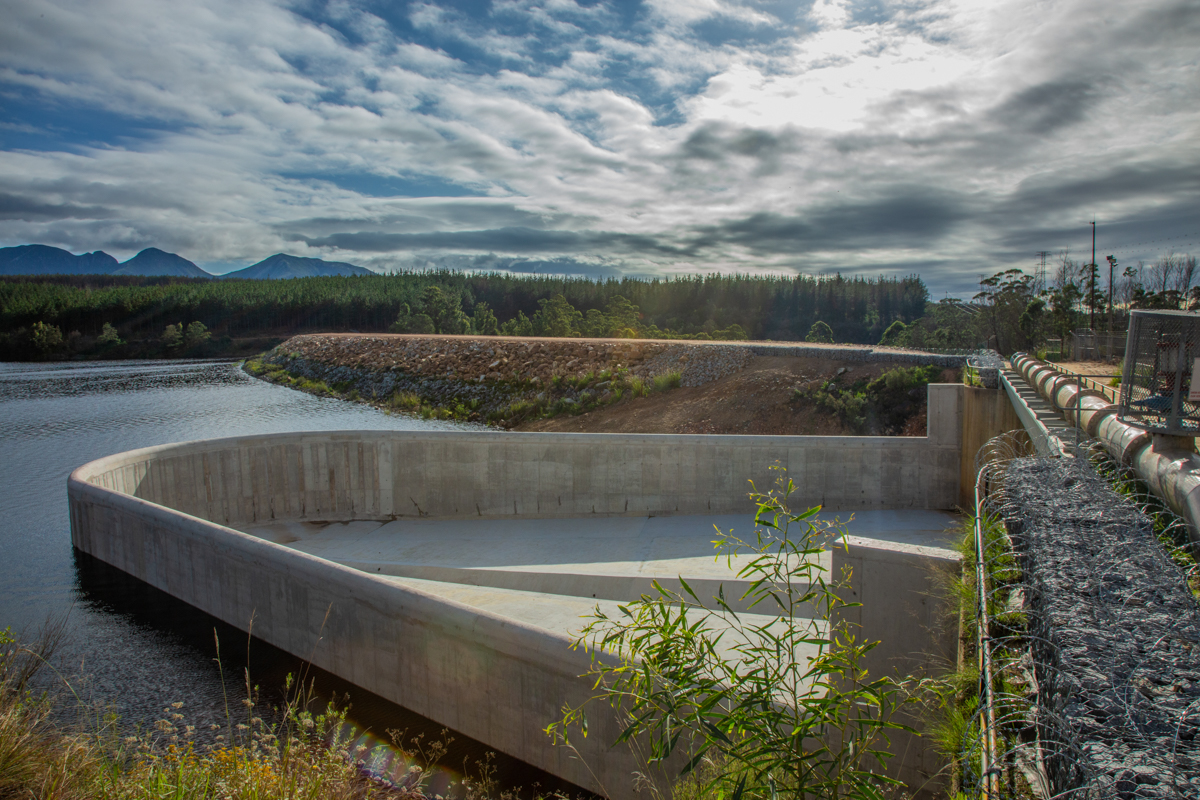 George Municipality congratulated Zutari Engineering Consultants, formerly known as Aurecon, for winning the Technical Excellence category at the South African Institute of Civil Engineering (SAICE) Awards last night for its work on the raising of the spillway and dam wall of the Garden Route Dam outside George.

George Municipality Director Civil Engineering Services Regenald Wesso said the Garden Route Dam was the main source of potable water for the city and its capacity had become a concern as the municipal area continued to grow exponentially. “Aurecon devised a novel duckbill-shaped spillway that allowed for the dam’s existing storage capacity to be increased by 25% while increasing the dam’s discharge capacity and thus improving the dam’s safety.

“We are proud to be associated with such an excellent team, which not only delivered an outstanding product but did so on time and within budget,” said Mr Wesso.

George Municipality Portfolio Councillor Civil Engineering Services Jacqulique von Brandis said the raised spillway and dam wall project proved that practical and cost-effective solutions to infrastructure development were possible without compromising on quality and effectivity. “Congratulations to Zutari (Aurecon) – for George this is much more than an award-winner, it is an extension of one of the city’s most important resources: water,” said Ms Von Brandis.

The Garden Route Dam spillway and wall project was completed in January 2020 and increased the dam storage capacity by 25% from 10 million cubic metres to an estimated new capacity of 12,5 milion cubic metres.

Good rainfall over the past few months have filled the dam to its old capacity in early October (2020) and is currently at an estimated 85% of the new capacity. The process of calibrating the dam’s new capacity is underway. It is unknown how quickly the additional dam capacity will fill up, especially taking into consideration that the ‘new’ top edge of the dam is wider and the incline flatter than before.

Criteria for the Technical Excellence category of the SAICE Awards:
• Portray the art and science of civil engineering to the general public
• Indicate how the profession finds answers to challenging demands
• Display unique or unusual features
• Demonstrate functional efficiency, economic contribution and service of mankind
• Demonstrate some notable advance in the solution of engineering problems
• Show particular aesthetic appeal
• Display engineering ingenuity in analysis or design and/or in construction technique
• Had successful handling of impacts on the environment
• Be well managed, finishing on time and within budget

Project details:
The previous Garden Route spillway was 25m wide, which was extended to 80m by curving the spillway in the upstream direction. The new spillway consists of a reinforced concrete cantilever structure, which is unusual for hydraulic structures of this type, as these are normally self-stable by their mass. To enhance the stability, the structure is provided with rockfill on the upstream side of the wall footing, in addition to rock anchors.

Caption
The Garden Route Dam spillway and wall photographed upon completion in January 2020.