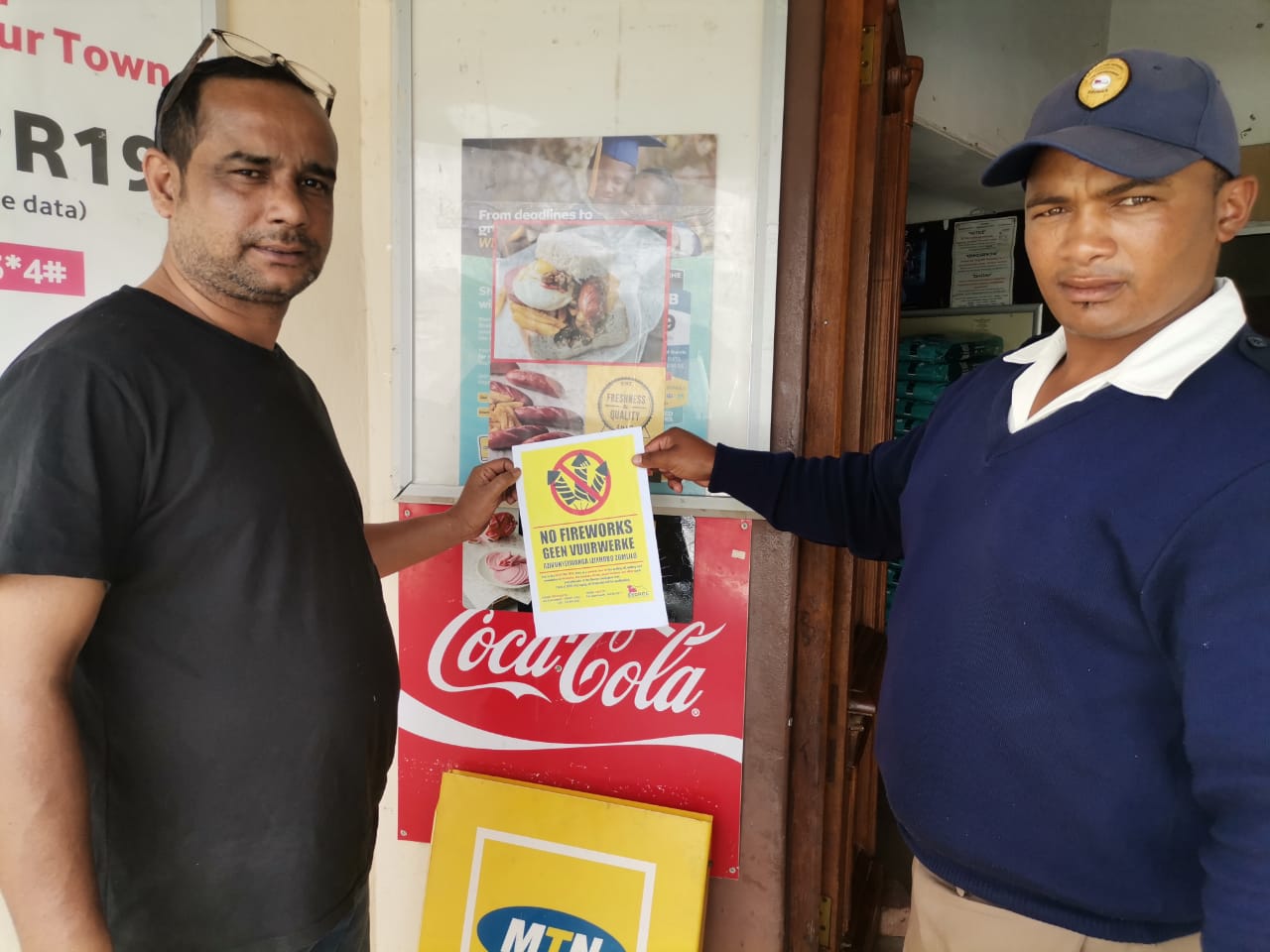 George Municipality Law Enforcement officers have visited 241 shops in George and Uniondale areas since the last sweep in November and fined five shop owners  a total of R7500 for having fireworks in their possession. Law Enforcement officers have put up hundreds of posters about the ban on fireworks in the George Municipal area and will continue writing out warnings and issue fines to shop owners who refuse to adhere to the law.

The value of the fireworks confiscated is approximately R1700. Officers will next clamp down on Thembalethu, Rosedale and New Dawn Park. Law Enforcement official, Ashley Joseph has visited 14 shops in the Uniondale area and handed out posters. No fireworks have been confiscated. Joseph will still visit shops in Haarlem and surrounding farming areas.

We remind the public that due to the high fire risk, the setting off, and possession of fireworks, firecrackers, flares, paper lanterns and other such paraphernalia in the George municipal area is not allowed. The fireworks confiscated by our Law Enforcement officers will be handed over to the police for disposal. Confiscation notices are issued to the offending shops.

George has strict firework legislation and according to the Bylaw on Community Safety, Section 58 (13) No person may discharge fireworks outside of a designated Fire Works Area. No Fire Works area has been made available in George and should someone be caught discharging a firework, a flare, or lighting a Chinese lantern an immediate fine of R1000 is applicable as well as a potential charge of arson.

Setting off marine rocket flares for fun is hugely dangerous and irresponsible. NSRI is compelled to log and investigate every incident in case it is a real emergency which of course takes up their time and valuable resources and could detract from genuine flare sightings. It is also hugely dangerous for those setting off the flares, as they are quite costly, and sometimes also out of date.

Marine guidance notes explain that all old flares need to be disposed of correctly. Rocket flares degrade with time and there have been cases where the rocket propellant separates from the parachute, and you are left with an uncontrolled flare which then comes back down and hits the person who has fired it off.

George Municipality will firmly enforce the applicable by-laws and additional Law Enforcement officers will be deployed at various areas and beaches over the festive season to attend to fireworks complaints. This will hopefully assist in reducing the noise levels and allow people (and their pets) to plan for “noisy” periods thus allowing for a quieter, safer environment for all concerned. For some pets, especially dogs and cats with particularly noise-sensitive ears, the sound of fireworks can cause intense fear responses. Some pets will go to extremes to hide, others get startled and run away, and general anxiety caused by unexpected loud sounds can have long-lasting effects on animals.

_*Fireworks 1 and 2: Some of the fireworks and crackers confiscated in George.*_

_*fireworks 3: Ashley Joseph with hands a poster to the Jozelle shop owner, Zakir Hossin in the Uniondale CBD.*_