The George Municipality’s sports team that participated in the Garden Route Sport and Recreation Day on the 30 of September in Riversdale, came back victorious as the team grabbed two gold medals. 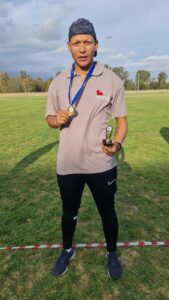 The two gold medalists are Grant November for golf and Randy Wesso for table tennis. The netball also went through to the semi-finals and won 9/7. The George netball team was supposed to play in the finals, but the game did not take place due to logistics. However, based on the goal average, the George Municipal netball team was the top team.

The Executive Mayor of George, Alderman Leon van Wyk congratulated the team for their success. “We are thrilled to hear that you went out there and represented George Municipality. When you left George, you told me that you would make us proud, and I am thrilled that you made this a reality. Congratulations to the officials who attained Gold and to our netball team who reached the final. Well done to all competitors. you have made us proud!”

The Garden Route Sport and Recreation Day is an annual sports event that is hosted by Sport and Recreation Services of the Western Cape Department of Cultural Affairs and Sport involving government officials in the various districts of the province as well as in the metropole to try their hand at soccer, mini-cricket, volleyball, tug of war, chess, athletics, and many other codes. The George Municipality has always been part of the Garden Route Sport and Recreation Day, formerly known as the “Better Together Games” since its inception in 2007 and successfully brought back gold, silver and bronze medallions and gone through to the final games.