The newly established Ward Committees for George consisting of 274 ward committee members from 28 wards are undergoing an induction into the council and their responsibilities in a series of orientation and training sessions throughout the greater George.  The first induction session was held at the George Civic Centre on Thursday, 7 July 2022.

According to Dr Kosie Haarhoff, the deputy director for George Municipality’s Strategic Growth and Development, the George Municipality concluded the process of the Ward Committee’s establishment in February this year and the immediate expectation is to ensure that they are functional and effective in discharging their roles and responsibilities.  “The legislation for Local Government obliges municipalities to provide support to the ward committees and to build their capacity.  However, the form of this support and the institutional and financial investment is at the discretion of the municipality. To be effective ward committee members must know and understand their work environment, it is therefore imperative that ward committees are capacitated to fulfil their roles democratically,” said Dr Haarhoff.

“The latter must be preceded by a comprehensive induction and training programme aimed at empowering Ward Committees to ensure their meaningful participation in municipal affairs. The induction will capacitate ward committee members in that they will have a better understanding of the municipal operational environment and their role within a democratic environment. Furthermore, ward committee members would get a better understanding of the intergovernmental framework, budget and resource allocation and community development,” he added. 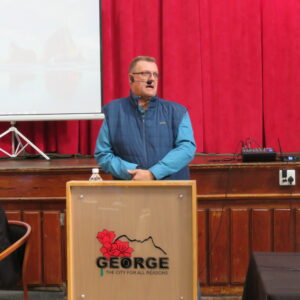 Speaker Snyman furthermore offered his confidence to ward committees to play a supervisory role to hold councillors accountable for their duties and institute discipline when deemed necessary. “I’m the one that has to keep your councillors accountable, so if there are any issues needing my attention, such as councillors not fulfilling their duties and responsibilities towards you and your wards, it is your responsibility to bring those problems to my attention so that we can investigate, and take the necessary action,” Snyman added.

The deputy executive mayor of George, councillor Raybin Figland was assigned the role of welcoming the ward committees during the induction. In his opening remarks, councillor Figland thanked the ward committees for availing themselves to serve their communities. “This is your municipality, I’m glad to hear that the speaker is saying you need to keep your councillors accountable, you voted for them, and they are accountable to you, not the other way round,” Figland said. 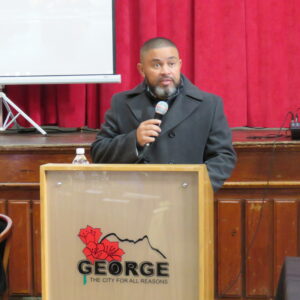 “You are the representatives of your community, take up your places and responsibility as you represent your respective geographical areas and sectors such as youth, sport, safety, arts & culture, business et cetera. From here until the next election, it will be your responsibility to fight for your wards to ensure that there is proper public participation when this municipality deals with the municipal budget and the integrated development plan, among others. You ought to be positive brands and ambassadors for your wards,” Figland added.

What the induction entails

The first induction was held at the George Civic Centre on Thursday, 7 July 2022. The Ward Committees were orientated about the Municipality’s directorates. Directors introduced their portfolio councillors, presented their directorates’ organisational structures, their responsibilities, and the core business and gave an overview of their annual budgets.

Following the induction sessions, the Ward Committee start their work that among other duties including monthly and quarterly meetings, know your ward committee campaign, attendance of formal and scheduled community- and sector report back meetings, assisting the municipality in service delivery improvement, overseeing development projects emerging from IDP/Ward Based Integrated Development Plan and attend and influence municipal budget meetings and processes.