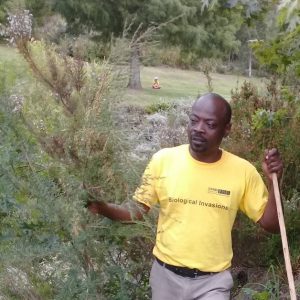 The find was reported to the early detection and rapid response team of the South African National Biodiversity Institute (SANBI), who arranged for its quick removal. The team also investigated up and downstream for more infection sites but found none so far.

The origin of the infestation is uncertain but is most likely from a nearby residential garden.

Kunzea ericoides, also known as Burgan, kanuka or white teatree, is an evergreen shrub or small tree up to 5m high, and native to south-eastern Australia and New Zealand where it grows in a wide range of habitats. It is a member of the myrtle family, Myrtaceae. The bark is grey and flaky; leaves are aromatic, quite thick, soft, typically 4-12mm long and 1-2mm wide. It can be distinguished from similar species in South Africa by its clusters of flowers and fruits which are borne on long stalks and stamens which are much longer than the petals. Burgan easily invades any habitat containing open forest complexes and proceeds to out-compete other young trees and shrubs, shading out ground layer plants.

It is not currently legislated in South Africa as invasive, but environmental organisations are pushing for its ban from the nursery trade and prioritised for eradication (category 1a under CARA).

Caption: Ashley Baloyi from the early detection and rapid response team of the South African National Biodiversity Institute (SANBI) on site in Van Riebeeck Gardens where Kunzea ericoides have been detected and eradicated.