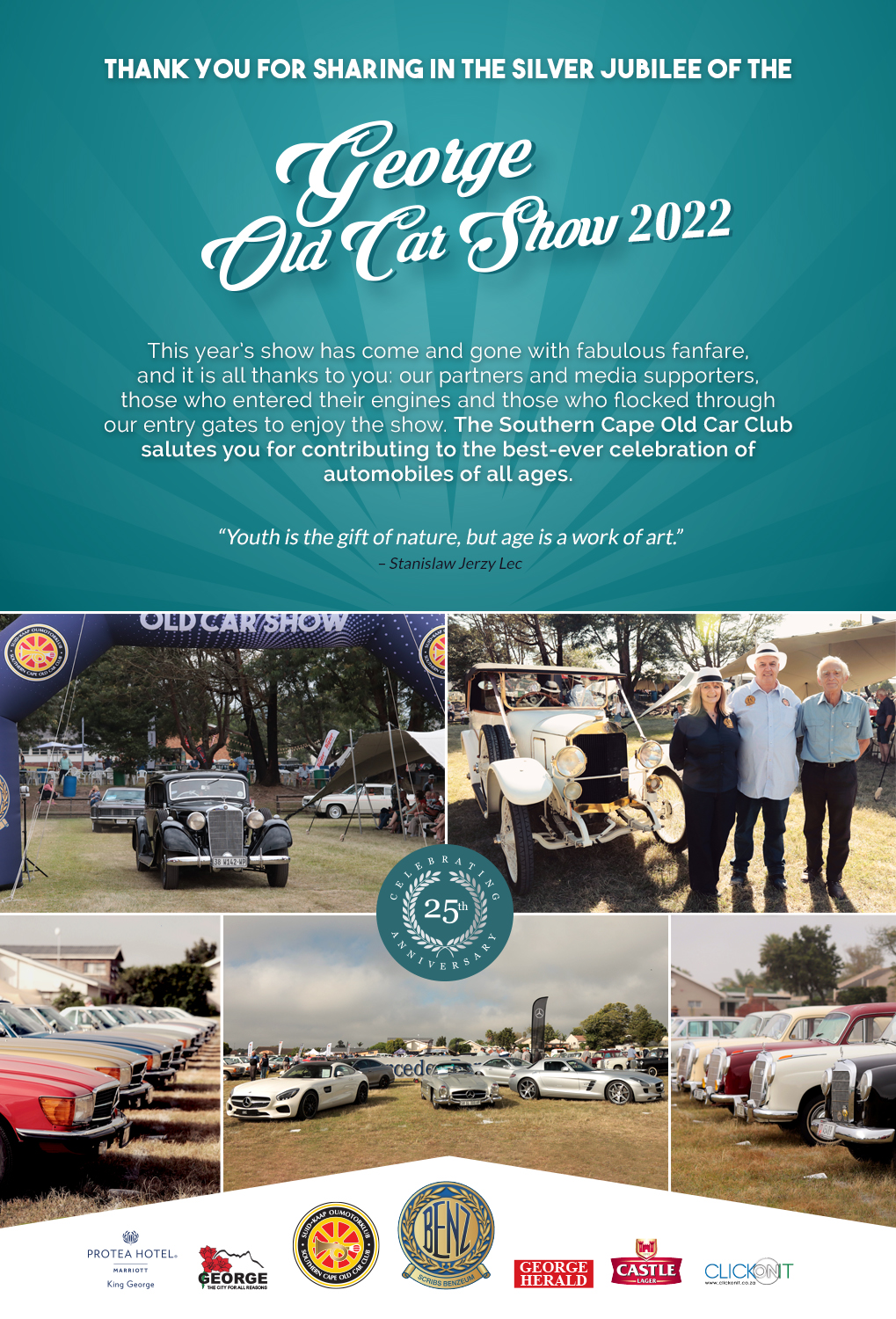 George (Garden Route) – February 2022 Being on the road in and around the Southern Cape centre of George in the days leading up to its favourite gathering of special cars and their proud proprietors, can only be described as petrolhead heaven.

The influx of beautifully preserved old cars, motorbikes, bakkies, tractors and military vehicles was evident as these machines converged upon the Garden Route from near and far. Vintage cars were joined on the N2’s George approaches by hot-rods, street-rods, modified cars and other lightning-fast representatives of modern fleets, either making their way on own steam or the back of humongous car carriers, all roads leading to the meticulously laid out showgrounds at Eden Technical High School.

The Southern Cape Old Car Club’s flagship annual event, George Old Car Show (GOCS) celebrated its 25th anniversary with great fanfare in perfect weather for an outdoors affair of such magnitude. The Silver Jubilee milestone featured 2,000 engines of an incredible variety, also including stationary engines and model cars. During the two show days on February 12 and 13, around 8,000 visitors entered through the gates for their tasty, racy slice of the action.

Entry tickets were sold for different time slots of the day, which meant that the organising committee and their army of helpers were always on top of crowd control and that everyone inside the school’s vast grounds could enjoy the displays, stalls, demonstrations and drive-bys while keeping a safe distance from fellow motor fans.

And for latecomers who missed the boat once tickets were sold out, a great consolation was that the event was streamed live, from the official opening on Saturday morning through to general pans of displays and a multitude of interviews with special car owners being broadcast to an appreciative online audience.

Among those who welcomed the Saturday’s first set of show-goers were Waldo and René Scribante of George Old Car Show premier partners, SCRIBS BENZeum, that served as venue for social events leading up to and during the weekend. Among the gatherings hosted at this unique venue was a spit braai to conclude the Zesto’s Café Vet Tour, participants of which had joined their Kalk Bay colleagues for a memorable road trip in the week preceding the show.

Along with SCRIBS BENZeum as premier partner, the success of GOCS 2022 is also due to the contribution of supporting partners Protea Hotel by Marriott King George, SAB, ClickOnIt, George Municipality, en George Herald.

In his opening address, GOCS chairman Alewijn Dippenaar thanked not only his 35-strong committee of Southern Cape Old Car Club members, but also the gents and ladies who had fulfilled that role during the past quarter century of shows presented with aplomb.

From the first gathering in the late 90s on Paul and Leonora Fick’s farm overlooking Victoria Bay, the show had grown exponentially each year. And this year’s fully subscribed event would not have been as successful without the groundwork done by previous generations of old car lovers.

Kudos are due to Dippenaar and his crew and all of those who preceded them, so contributing to the roaring success of this weekend’s George Old Car Show. Visit www.scocc.co.za for details of the Southern Cape Old Car Club, click on https://bit.ly/3sGV6LN for coverage of the weekend’s GOCS, and follow them on Facebook for more photos and feedback.