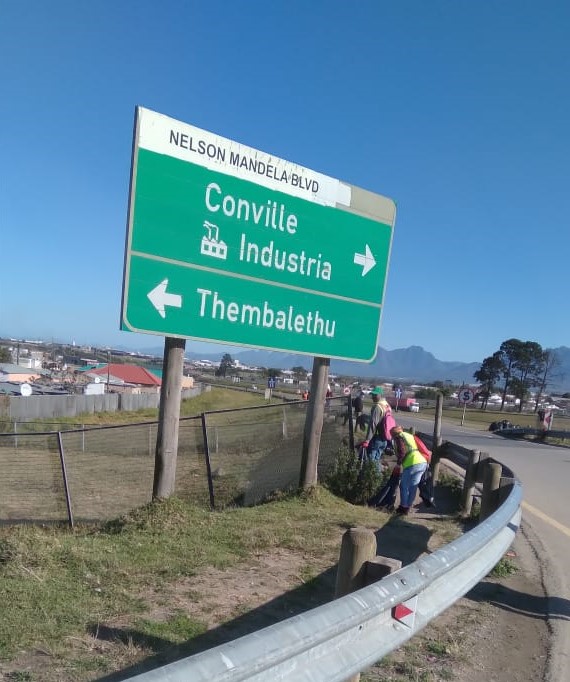 The Department of Community Services supported by other directorates recently undertook a number of projects in and around Thembalethu recently.

Planting of trees
The municipality is focusing on the cleaning and greening of the environment, and Thembalethu has been a focus point since the beginning of August into September 2021 when Arbor Month is celebrated. Thembalethu was picked due to the illegal dumping taking place in the area.  A team from the George Municipality’s Environmental department planted trees at the Inkubeko Youth and Science Centre in Thembalethu. There were 3 trees planted, namely Celtis africana, Trimeria grandifolia, Tarchonanthus camphoratus. There were additional trees left at the site for the employees to plant. All the trees were donated by Precious Tree Project and other donors. 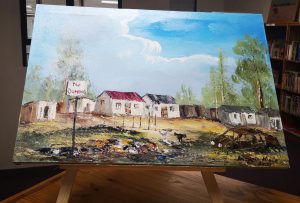 Thembalethu Library hosted several artists including Anthony Noble, Ernest Ntseke and Bob Bulelani who held painting demonstrations with the theme of Illegal dumping. Several displays with regards to this subject matter (Illegal dumping) were set up for all to see, at the entrance of the library.

The importance of recycling was also covered and depicted. During National Book Week which took place from 6-10 September 2021, pupils at the different schools were invited to either write a poem or essay about illegal dumping. All poems and essays will be exhibited inside the library. 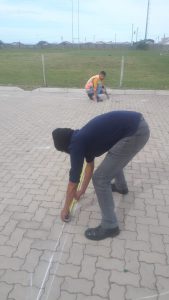 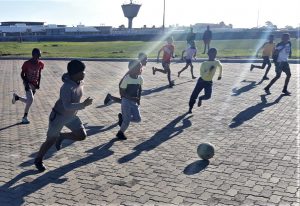 Soccer opportunities
After engagement with the local football association, an initiative was launched that will assist in providing more opportunities for the youth to partake in soccer and enter into the sport. In collaboration with the Directorate Civil Engineering Services, three mini-soccer courts were painted on the paved area at the Thembalethu Sport grounds. These courts will go a long way in assisting the facilitation of soccer development programmes, as well as holiday programmes aimed at the youth.

Weeds and removal of trees
The Tree and Cemeteries team focused on the eradication and herbicide application for weeds all along the main roads in Thembalethu, as well as on sidewalks and municipal open spaces.

Several problem trees were removed including four in Nelson Mandela Boulvevard, a dead oak tree at the T Junction, two trees at the Thembalethu Thusong Centre and a pine tree in Ncamanza Street. Trees were trimmed on Ncamanza and Tshefu Street to improve street visibility. 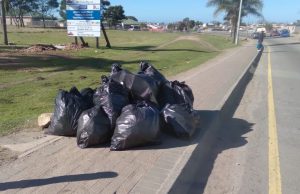 This project commenced in late August with Nelson Mandela Boulevard as the starting point. The purpose of this project was to target the Illegal Dumping sites, through clearing them to try and prevent or reduce ongoing dumping there. Unfortunately, Thembalethu is the biggest hotspot for Illegal Dumping in the George area. Information flyers on the dangers of illegal dumping were also handed out from door to door to remind residents of why they should report; and or prevent illegal dumping in their communities.

George Traffic Department road safety outreach
The Traffic Department recently focused on Road safety in Thembalethu with the aim to educate drivers on sharing the road with one another, not to speed and to be tolerant on the road. Officers distributed road safety educational pamphlets to educate pedestrians on safe walking and the proper method of crossing roads. The road safety mascot, Danny Cat, also visited schools Tyholora and Thembalethu Primary Schools where officers spoke about road safety and used the opportunity to explain the importance of sanitising your hands. 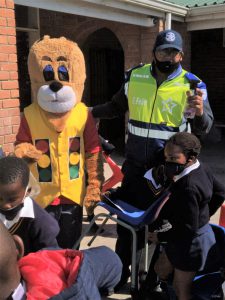