Executive Mayor for George, Leon Van Wyk visited the Outeniqua Wastewater Treatment Works (OWWTW) on Monday  25 October, to review the construction works underway for the upgrading and capacity extension of the plant . This project was initially delayed due to contractual matters and again later with the onset of Covid-19 and the subsequent challenges introduced by lockdown.

Certain materials had to be imported and international travel restrictions due to the pandemic resulted in material shortages. The construction programme was however revised as a result to allow for new interim deadlines while still completing the project within the approved project timelines.

“This significant upgrade is essential for the ongoing growth we are experiencing throughout George and the increased capacity from 15Ml/dl to 25Ml/d  will provide us with the ability to continue with construction activity and development to move forward at a fair pace going into the future,” said Ald Van Wyk.

Two of four new aerators has been installed on the old works’ carousel activated sludge biological reactor. Each has a 130 kW motor on top of the gearbox, which is connected below the concrete slab to an aerator. This combination adds air to the water to dissolve oxygen for bacterial growth in the water to enable aerobic biological treatment of the sewage.

The concrete platforms and beams had to be rehabilitated and retrofitted with carbon strips to provide additional reinforcement for the new heavier aerators to be installed on the existing platforms. Two of the four new aerators are already operational and the concrete remedial works under way on the two remaining bays to allow the installation of the other two new aerators.

The construction of this mechanical, electrical and instrumentation works contract is being executed in three distinct components i.e. the inlet works, the carousel (refurbish existing 15 Ml/d reactor) and completion of the equipping of the new 10 Ml/d reactor. All of these components  are due for completion in February 2023 while the first two components are expected to be fully operational by May 2022. For the most part the Civil engineering construction is  nearing completion and only some roadworks remain.

The waste skips for screenings and grit will be housed inside the new skip handling building, after the screenings and grit has been washed and compacted, in order to allow for air collection from the building and to pass this air through the odour control system, where the air is to be treated to a less odorous state before being released back into the environment through the chimney.

The 10 Ml/d new reactor is the main component for the provision of additional capacity at the plant. The component was also constructed in phases and the civil engineering structures were completed previously including the concrete structures of the reactor and settling tanks plus the building to house the blowers and motor control centre.

The first of four new aerators has been installed on the old works’ carousel activated sludge biological reactor. 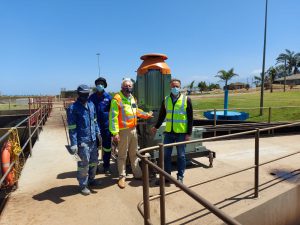 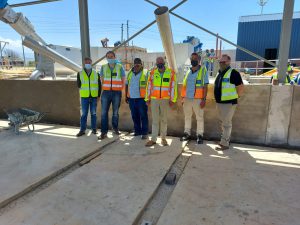 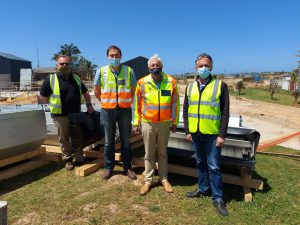