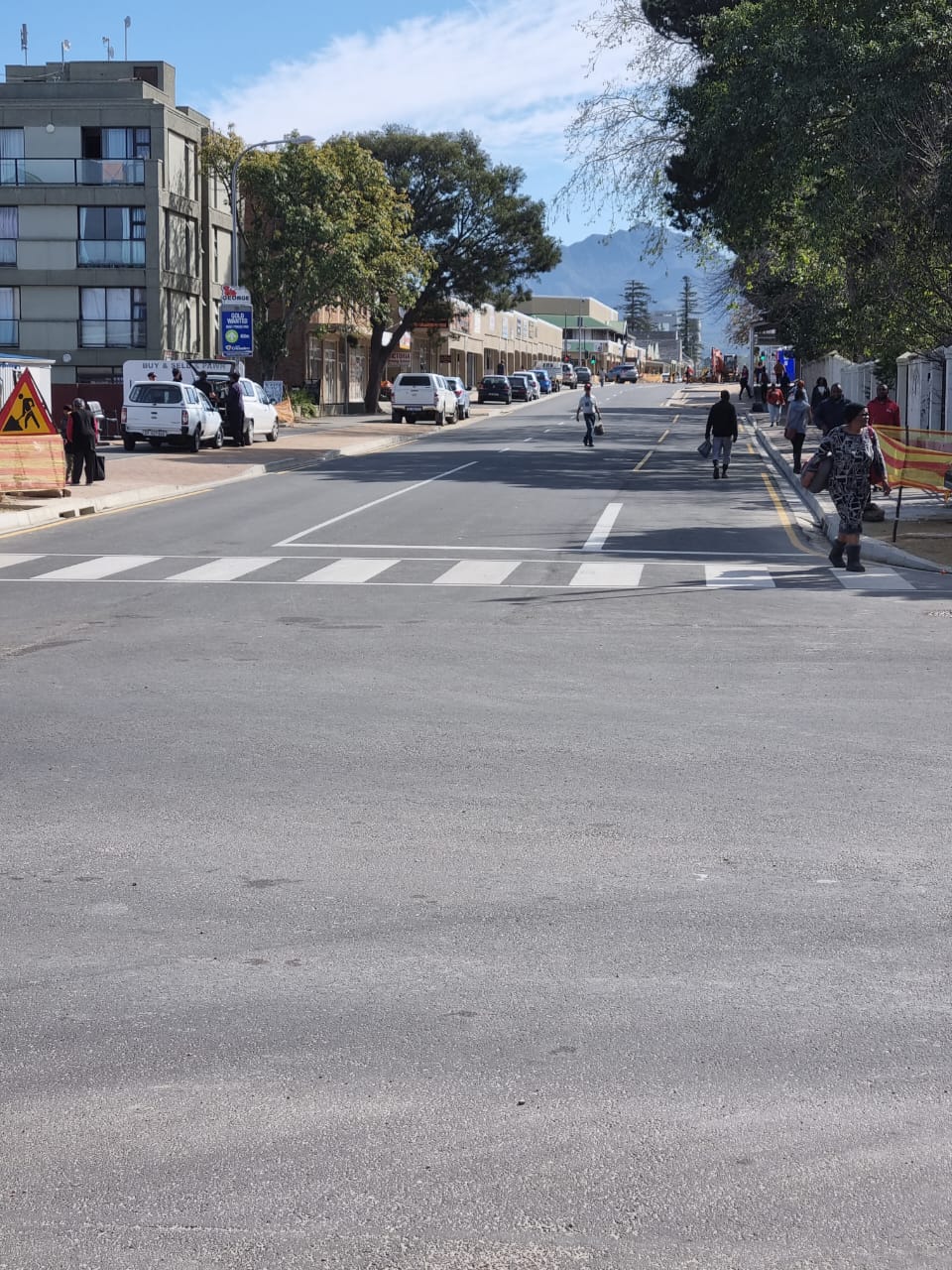 George Municipality has been inundated with comments regarding all the road upgrades taking place throughout the city in the past few days and this is understandable, considering the impact on all road users. George Municipality is aware of the inconvenience caused by these infrastructure upgrades but as stated a few months ago by George Executive Mayor Alderman Leon van Wyk, the municipality is committed to optimizing road upgrades across the city.

“George Municipality continually pursues other sources of funding to address as many issues as possible. The road upgrade projects will utilize funding from three sources over the next three financial years including George Integrated Public Transport Network (GIPTN) funding, own budget and Municipal Infrastructure Grant (MIG) funding as well as in the case of the York Street Circles, private funding,” said Ald Van Wyk.

The most frequently asked question is why these road upgrades on major routes are all being implemented within a short time period and were not staggered to lessen the overall impact of road users. The main reason for this is the source of funding, and the timeframes in which expenditure must be incurred.  Grant funding has very specific conditions attached, one being the period during which the allocated funding must be spent – if the funding is not used it does not rollover to the next financial year and it is returned to the source.

With this in mind, it must also be noted that certain government departments work on the premise that if a Local Municipality achieves a certain expenditure percentage by November/December of the municipal financial year,  additional funding may be diverted from under-spending municipalities and additional grant funding can be allocated during the national adjustment budget process.

George has been blessed this year with large grant and external allocations, far more than in any other financial year, to upgrade infrastructure for residents. The upgrading of this infrastructure is very costly and for the Municipality to fund these upgrades would require many millions that could only be generated by drastically increasing rates and taxes as the cost would have to be funded by revenue from municipal sources. “The municipality is grateful for these additional income sources that have enabled us to upgrade overall infrastructure and pedestrian experience, which ultimately benefit business, promote investment and improves quality of life,” said Browen Johnson, Portfolio Councillor for Civil Engineering Services.

As far as is possible major construction work is scheduled annually for completion by December , or for commencement in January of the next year. George is a major tourist and holiday destination, and the annual December-January peak holiday season is also the peak economic season for many businesses in George, both big and small . Apart from its abundant natural attractions, George’s main attraction is also it’s excellent services and infrastructure. These road upgrades will significantly improve the main accesses to George, as well as other well-travelled routes.

For the duration of the construction period, Traffic officials and/or point duty officers will be utilized during peak hours where possible to try and assist with traffic flow.

Construction of the two new traffic circles in York Street next to the old tourist resort (Mount View Resort) between Hope Street Circle and the GO GEORGE Bus Depot commenced on Monday, 8 August 2022 and is expected to be completed during December 2022. These road upgrades are required to accommodate the additional traffic which is expected to be generated by the proposed Mediclinic, 1 on York and residential developments where the Crocodile Farm was previously situated.  The designs adhere to Municipal and Provincial requirements, but the project is funded by various private stakeholders.

The construction will take place in two phases, which entails the following:
Phase 1 has commenced in August 2022 and entails the construction of two “half circles” in the western carriageway. During this phase, the western dual lane carriageway (indicated in yellow) will be closed to traffic. Motorists will be diverted to the eastern dual lane carriageway (indicated in red) which will be used for two-way traffic. 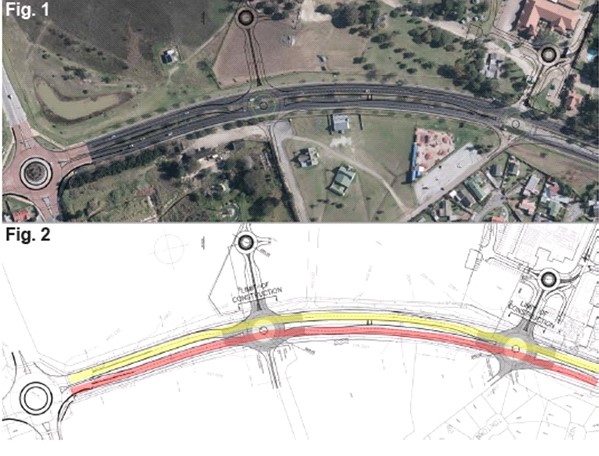 MARKET STREET
This project is funded mainly from the Public Transport Network Grant.
This project will see a significant positive upgrade in the Central Business District. The five phases are progressing well, noting that the project did experience ongoing challenges with intermittent and frequent rain that is always problematic with deeper excavations. The optic fibre service provider co-ordinated their installations with the works and impact on sidewalk space in certain areas, but this work has been concluded. 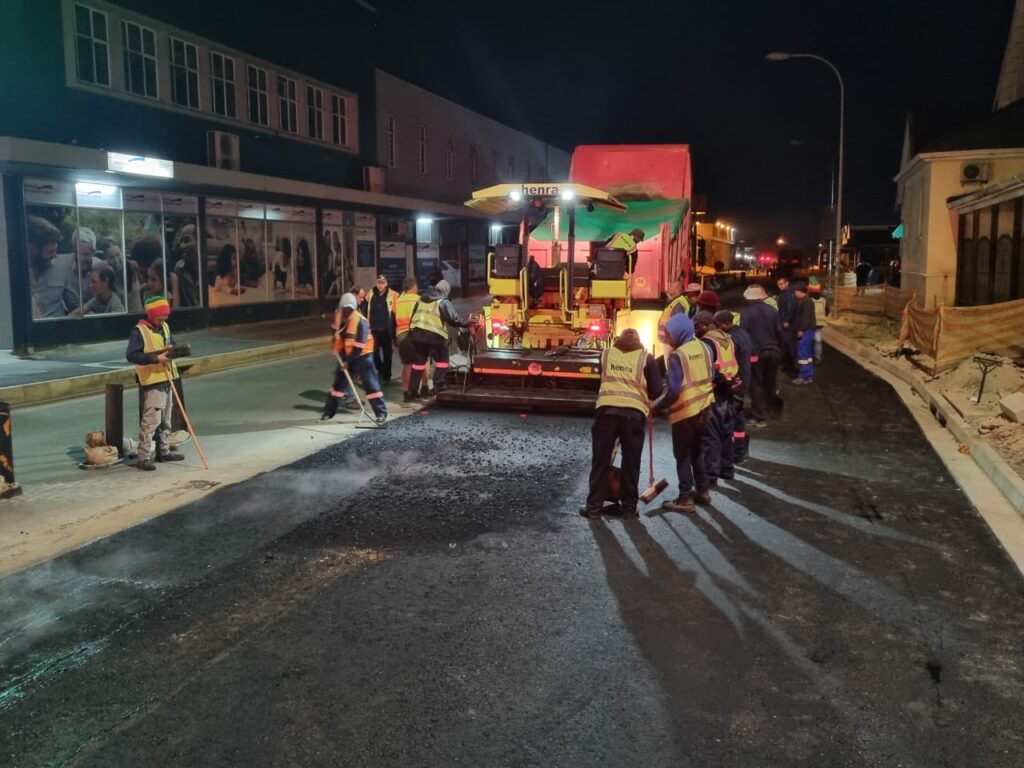 The full project extends from York Street to Hope Street (in 5 phases with two phases completed, one nearing completion (End of August 2022), and the latest two progressing very well (set to be completed February 2023) and includes a full rebuild and upgrade of the full road reserve and includes the asphalting of the pedestrian walkways that include the paving of the furniture zone. (The furniture zone is the area for all street furniture (benches), streetlights, waste bins etc. and acts as a buffer between the roadway and the pedestrian sidewalk.)

As far as possible direct property access is maintained with the necessary arrangements /provisions made in advance with any affected business owner via Mr Alewijn Dippenaar.  Business and property owners affected by the road construction are requested to contact Alewijn Dippenaar at dyndev@mweb.co.za or on 082 457 5675 if they have any queries or concerns, and must not communicate directly with, or request information from the Contractor’s personnel.

AIRWAY ROAD
This project is funded mainly from the Public Transport Network Grant.
The introduction of the GO GEORGE public bus transport service and the increased traffic volumes in Airway Road has led to serious degradation of the road structure, requiring a rebuild to renew the life cycle of this important transport asset. The work consists of rehabilitation of the 600m of Airway Road, while including realignment of the traffic circles.  The project is set to be completed by mid-October 2022.

GOLF STREET
This project is funded mainly from the Public Transport Network Grant.
The introduction of the GO GEORGE  public bus transport service and the increased traffic volumes in Golf Street has led to serious degradation of the road structure, requiring a rebuild to renew the life cycle of this important transport asset. The work consists of rebuilding the majority of Golf Street and is set to commence in the second portion of 2022, subject to the securing of sufficient funding.

TABATA STREET PHASE 2
This project is funded mainly from the Public Transport Network Grant.
The upgrading of the next portion of Tabata Street, Thembalethu, from Mfayana Street to Mbewo street (about 600m), commenced in July 2022 and the contractor is progressing with the works. This phase of construction is set to be completed end February 2023. The improvements to this main arterial through Zone 12, 13 and 15 will most certainly improve the experience of road users, pedestrians and the lives of residents.

The road, sidewalk (similar to other community routes) and stormwater system upgrades will improve vehicle and pedestrian movement and reduce flooding of the street and properties. The entire intended Tabata Street upgrade extends from the intersection with Nelson Mandela Boulevard (Fourways) to where the road re-joins Nelson Mandela Boulevard and will be implemented in phases, subject to the securing of sufficient funding.

THEMBALETHU / N2 BRIDGE WIDENING
Project funded jointly by SANRAL and the Public Transport Network Grant
This strategic upgrade is long overdue and involves the doubling of the original bridge, significant improvements to sidewalks and non-motorised transport facilities, upgraded N2 on-off ramps and the widening of Nelson Mandela Boulevard between Main/Ncamazana Streets in the north and Tabata/Ngcakani Streets in the south. It has taken more than 12 years to secure funding for this project that is now jointly funded by SANRAL and the Public Transport Network Grant. This project will see a marked improvement in traffic flow and safety of all road users, and especially residents of Thembalethu, this being the only access to Thembalethu. Construction work has commenced with an anticipated completion date in May 2024.

RESEALING OF ROADS (ASPHALT RESEALING)
Provincial Government Western Cape provides 80% of the funding for these projects
CJ Langenhoven Road and York Street are both Proclaimed Roads within the Municipal Road Network. As part of the Grant Funding for maintenance of these roads provided by Western Cape Government: Transport and Public Works (which are the Road Authority of both Roads), George Municipality was fortunate to get a significant portion of the Provincial Budget for such roads. The condition of the Grant Funding is that it be spent before the end of December 2022, which calls for an overlapping of the two projects to meet the condition. Consideration has been given to coordinate the two projects to ensure that traffic disruptions are limited to the absolute minimum. With the projects being rolled out in winter, it makes it difficult to programme night work, due to a drop in the temperature which makes it difficult to work with asphalt and the placement thereof.

Resealing of CJ Langenhoven Road (Phase 2) between Davidson Road (Provincial Hospital) and York Street has commenced and follows on Phase 1 that took place between Witfontein and Davidson Road. The remedial work will require the milling and removal of existing bituminous layers as well as milling and removal of existing gravel base layers. The milling operations will be followed by the placing of new bituminous base layers and surface layers. The above work will be carried out in half widths and CJ Langenhoven Street will be restricted to one-way traffic at times.

Traffic will be managed by means of Stop and Go or rerouted. This will lead to traffic congestion and delays. Access to businesses will be maintained, however parking between Palm Road and York Street will be impacted. Reconstruction and repairs to kerbs will have no major traffic impact. The anticipated completed date is mid- October 2022.

Similar to CJ Langenhoven Road (Phase 2), York Street also requires the milling and removal of existing bituminous layers as well as milling and removal of existing gravel base layers that will be followed by the placing of new bituminous base layers and surface layers. The anticipated commencement date is mid-September 2022 with a completion date projected by end of December 2022.

GENERAL CONSTRUCTION INFORMATION
The impact on traffic movement varies for each project depending on the nature of the work done, and the details are published in advertisements in local print media and on the George Municipality social media channels ahead of commencement of construction. If the GO GEORGE service will be affected this is communicated by GO GEORGE champions on location as well as via the usual social media and other communication platforms. Municipal services such as water, sewer and electricity may be temporarily disrupted, and planned disruptions will be communicated via social media when required.