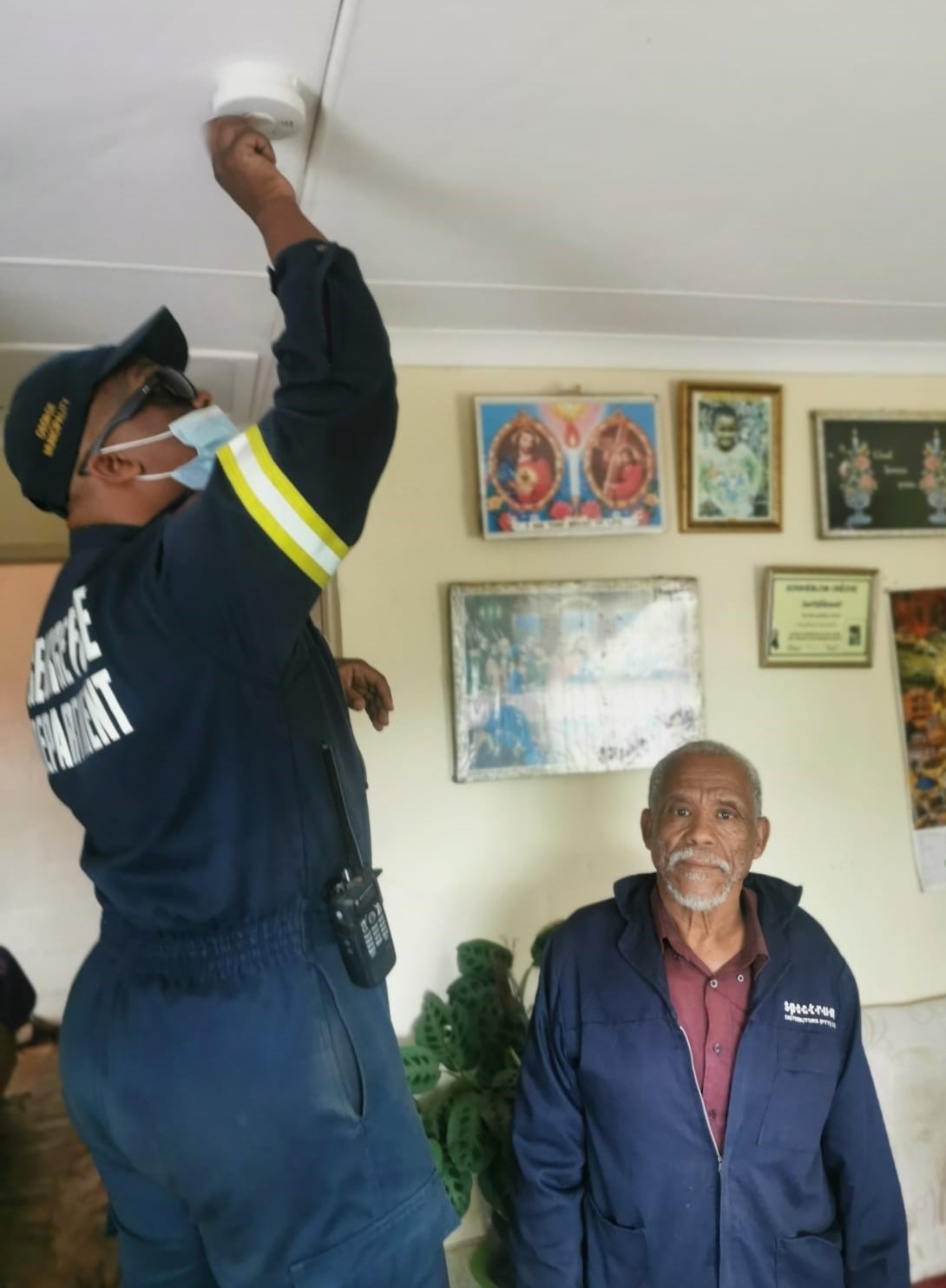 George Fire and Rescue Services are currently installing 500 smoke detectors and handing out fire blankets as part of fire safety and awareness in Touwsranten.

George Chief Fire Officer Neels Barnard said the community’s location in a high-vegetation zone among farms and plantations outside Wilderness made it vulnerable to wildland fires. “The municipality recognised the risk some years ago and has created and maintained firebreaks around the settlement for some time but decided to address fire risk at homes as well.

“The municipality has a longstanding relationship with Western Cape Disaster Risk Management (WCDRM), which had done risk assessment in the Wilderness, Hoekwil and Touwranten areas late last year. The WCDRM affirmed the village’s vulnerable status and sponsored fire detectors for the estimated 500 structures, mostly RDP housing.

“The project was boosted by the availability of 700 fire blankets, originally donated via Oakhurst Insurance as part of an extended schools outreach programme that had been halted due to Covid-19.”

George Fire department launched the Touwsranten structural fire safety project on 26 April, going door-to-door installing fire detectors, handing out fire blankets and doing fire awareness in the community during available shifts. Circumstances-permitting, every legal formal and informal household in Touwsranten will have a smoke detector installed over the next six weeks. Firefighters install the unit, test that it is working and show inhabitants how to use and maintain the detector.

The initiative has already reaped fruits with at least one housefire prevented just a week after installation at a house in Amarula Street. Homeowner Liezel Barnard said the smoke detector had gone off in the kitchen while her teenage daughters were attending to a smaller child in the adjacent room. “The smoke detector went off before the house could catch fire and a neighbour, who could hear the alarm from next door, came rushing over to help the girls. He had the fire safety and smoke detector training the week before and I had not yet had a chance to show my girls what to do if the alarm went off. Now they know what to do and I am rest-assured that the detector works. The fire department is tops – they even revisited us to ensure that the detector was reset properly,” said Ms Barnard.

The battery-operated smoke detectors have an estimated 10-year lifespan and included a 9V battery (rectangle-shaped), which should ideally be replaced every six months but can last for years. Usually fixed to the roof in the living area of the IDP house, the detector is designed to make a loud, high-pitched sound when a concentration of smoke reaches the detector.

This project is another step in an ongoing initiative to expand fire support and safety to the extended Wilderness community, which includes the new satellite fire station current being built next to the local police station. The area is currently being served from the main fire station in the George CBD. The new double-storey facility near the N2 in Wilderness, which will be manned 24/7, is expected to be ready for occupation in July 2021.

Caption
George firefighter Wilton Oktober tests the smoke detector installed at the house of this Touwsranten resident (name not available).